Often you don't want to show your errors to user while the application is live in CodeIgniter. Even, turning off error reporting is often mentioned as a standard security precaution when switching to a production environment.

Now, no user can see the errors of the application.
Posted by FOYSAL at 8:16:00 PM No comments:

I got a helpful article on spl_autoload_register() function in this link      http://www.electrictoolbox.com/php-spl-autoload/
Posted by FOYSAL at 10:08:00 PM No comments:

There is a golden rule in designing a class: keep to real-world thinking. Although that rule sounds simple, it's quite nebulous - what is real-world thinking? There are a number of rules we can follow to keep our code particularly readable:

• To strictly follow OOP guidelines, nearly all variables should be either private or protected - they should not be accessible from outside of an object.

• We can put variables and functions as low down in our inheritance as they can go without repetition - if we find one object has variables and functions it is not supposed to have, we have gone wrong somewhere. For example, while dolphins can swim, gorillas cannot, so we should not put a swim() function into a mammal class "just to save time".

• Muir's law is important in this regard: "When we try to separate anything out by itself, we find it hitched to everything else in the universe". We should keep our classes distinct and separate from each other to begin with rather than try to hack them apart later on.

If we are wondering why it is that accessor functions should be used to read and write variables, it is because OOP practice dictates that objects should be self-contained - other parts of our program should be able to work with them using simple function calls. For example, imagine we are programming a strategy game where players can control multiple cities. Each city brings in various amount of food depending on how many workers are there. Now, if the player changes the number of workers in a city to 800, we could just effect the change with code like this:

However, how would that make any change to the amount of food coming in? It wouldn't, so we would need to make your code this:

Now, what if a few weeks later we decide that people can upgrade their cities to build farms and processing facilities that increase the amount of food being made? We'd have to search through our code for all the times we change the _FoodSurplus variable. Later, if we want to make more changes, we need to repeat the procedure again and again and again - the calling code needs to have explicit knowledge of how to handle changes to the number of workers in a city.

This is not how OOP works. In the OOP world, a city would be supposed to handle all these calculations itself, leaving the calling code looking like this:

The SetWorkers() function would contain all the other changes such as altering the _FoodSurplus level, but the key is that the calling code wouldn't need to know anything about that - any changes to the SetWorkers() calculation only needs to be made in one place.
Posted by FOYSAL at 9:59:00 PM No comments:

The box model is one of the cornerstones of CSS and dictates how elements are displayed and, to a certain extent, how they interact with each other. Every element on the page is considered to be a rectangular box made up of the element’s content, padding, border, and margin. 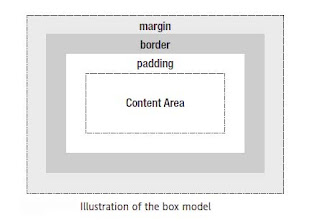 Padding is applied around the content area. If we add a background to an element, it will be applied to the area formed by the content and padding. As such, padding is often used to create a gutter around content so that it does not appear flush to the side of the background.
Adding a border applies a line to the outside of the padded area. These lines come in various styles such as solid, dashed, or dotted. Outside the border is a margin. Margins are transparent and cannot be seen. They are generally used to control the spacing between elements.
Padding, borders, and margins are optional and default to zero. However, many elements will be given margins and padding by the user-agent stylesheet. We can override these browser styles by setting the element’s margin or padding back to zero. We can do this on a case-by-case basis or for every element by using the universal selector:
* {
margin: 0;
padding: 0;
}
In CSS, width and height refer to the width and height of the content area. Adding padding, borders, and margins will not affect the size of the content area but will increase the overall size of an element’s box. If we wanted a box with a 10-pixel margin and a 5- pixel padding on each side to be 100 pixels wide, we would need to set the width of the content to be 70 pixels.
#myBox
{
margin: 10px;
padding: 5px;
width: 70px;
} 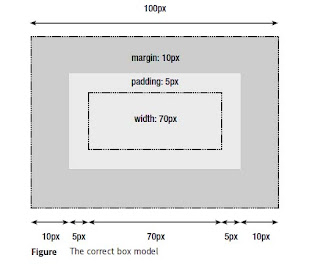 Padding, borders, and margins can be applied to all sides of an element or individual sides. Margins can also be given a negative value and can be used in a variety of techniques.
A box can contain any number of other boxes, creating a hierarchy of boxes that corresponds to the nesting of page elements. The browser window serves as the root element for this hierarchy.
There are two basic types of boxes, block and inline. Block boxes are generated by elements such as P, DIV or TABLE. Inline boxes are generated by tags such as B, I or SPAN and actual content like text and images.
The box type may also be set using the display property. Setting a value of block on an inline element, for example, will cause it to be treated as a block element. Note that if we set the display to none, no box is created. The browser acts as if the element did not exist. Likewise, any nested elements are ignored as well, even if they specifically declare some other display value.
Posted by FOYSAL at 10:18:00 PM No comments:

Inside a class, $this is a special variable that refers to the properties of the same class. $this can’t be used outside of a class. It’s designed to be used in statements inside a class to access variables inside the same class.
The format for using $this is the following:
$this-> variable name;
For example, in a Car class that has an attribute $gas, we would access $gas in the following way:
$this->gas;
Using $this refers to $gas inside the class. We can use $this in any of the following statements as shown:
$this->gas = 20;
if($this->gas > 10)
$product[$this->size] = $price;
As we can see, we use $this-> variable name in all the same ways we would use $varname.
Notice that a dollar sign ($) appears before this but not before gas. Don’t use a dollar sign before gas — as in    $this->$gas — because it changes statement’s meaning. We may or may not get an error message, but it isn’t referring to the variable $gas inside the current class.
Posted by FOYSAL at 8:12:00 AM No comments:

OOP was designed to allow programmers to more easily model their programs upon real world scenarios - programmers literally define things (objects) in their world (program), set a few basic properties, then ask them to do things.

The basic elements of object-oriented programs are objects. It’s easiest to understand objects as physical objects. For example, a car is an object. A car has properties, such as color, model, engine, and tires, also called attributes. A car has things it can do, too, such as move forward, move backward, park, roll over.
In general, objects are nouns. A person is an object. However, objects are not just physical objects. Often objects, like nouns, are more conceptual. For example, a bank account is not something we can hold in our hand, but it can be considered an object. A file is often an object. E-mail messages, addresses, songs, TV shows, meetings, and dates can all be objects.

A class is the script that serves as the template, or the pattern, that is used to create an object. The class defines the properties, the attributes, of the object. It also defines the things the object can do — its responsibilities. For example, we write a class that defines a car as four wheels and an engine and lists the things it can do, such as move forward and park. Then, given that class, we can write a statement that creates a car object. Our new car is created following the pattern in our class. When we use our car object, we may find that it is missing a few important things, like a door or a steering wheel or a reverse gear. That’s because we left those out of the class when we wrote it.
A class is a package containing two things: data and methods to access and modify that data. The data portion consists of variables; they're known as properties. The other part of a class is a set of functions that can alter a class properties; they're called methods.

As the person who writes a class, we know how things work inside the class. But it’s not necessary to know how an object accomplishes its responsibilities in order to use it; anyone can use a class. We have no clue how a telephone object works, but we can use it to make a phone call. The person who built the telephone knows what’s happening inside it. When there’s new technology, the phone builder can open the phone and improve it. As long as he doesn’t change the interface — the keypad and buttons — it doesn’t affect our use of the phone at all.

When we define a class, we don't define an object that can be accessed and manipulated. Instead, we define a template for an object. From this blueprint, we create malleable objects through a process known as instantiation.

A program can have multiple objects of the same class, just as a person can have more than one book or many pieces of fruit. Classes also live in a defined hierarchy. At the top of the chain, there is a generic class. Each class down the line is more specialized than its parent. For example, a parent class could be a building. Buildings can be further divided into residential and commercial. Residential buildings can be further subdivided into houses and apartment buildings, and so forth. Both houses and apartment buildings have the same set of properties as all residential buildings, just as residential and commercial buildings share some things in common.

When classes are used to express these parent-child relationships, the child class inherits the properties and methods defined in the parent class. This allows you to reuse the code from the parent class and requires you to write code only to adapt the new child to its specialized circumstances. This is called inheritance and is one of the major advantages of classes over functions. The process of defining a child class from a parent is known as subclassing or extending.

Classes in PHP are easy to define and create:


The class keyword defines a class, just as function defines a function. Method declaration is identical to how functions are defined.

Creating an object is as follows.


The new keyword instantiates an object $objDemo from Demo class.
Posted by FOYSAL at 4:44:00 AM No comments: